Storage or demand response capacity operators depending on the characteristics of the zones selected for the experimental tenders.

The energy transition is bringing about profound changes to the power system. RTE is supporting this transition by making adaptations to the network infrastructure that promote the large-scale integration of renewable energies and ensure that a high level of electricity quality is maintained.

RTE is designing these system changes while seeking a technical and economic optimum for the community which integrates social and environmental aspects.

For the dimensioning of the electricity transmission system, RTE already relies on the flexibility of RE generation, by incorporating the option of limiting it from time to time and temporarily when this would prevent the construction of network infrastructure for which the economic interest for the community is not greater than the disadvantages of these caps. This is the principle of optimal network dimensioning, described in the 2019 edition of the 10-year Network Development Plan (chapter "Adaptations").

To further this logic of optimisation, RTE is seeking to complete the panel of solutions taken into account for dimensioning of the network by integrating other flexibilities, such as demand response or storage. These additional flexibilities could, in some cases, represent a technically and economically relevant alternative to the adaptation of the network.

The evaluation of the relevance of storage or demand response solutions and, where relevant, the contracting of the flexibility service will be done through flexibility tenders. 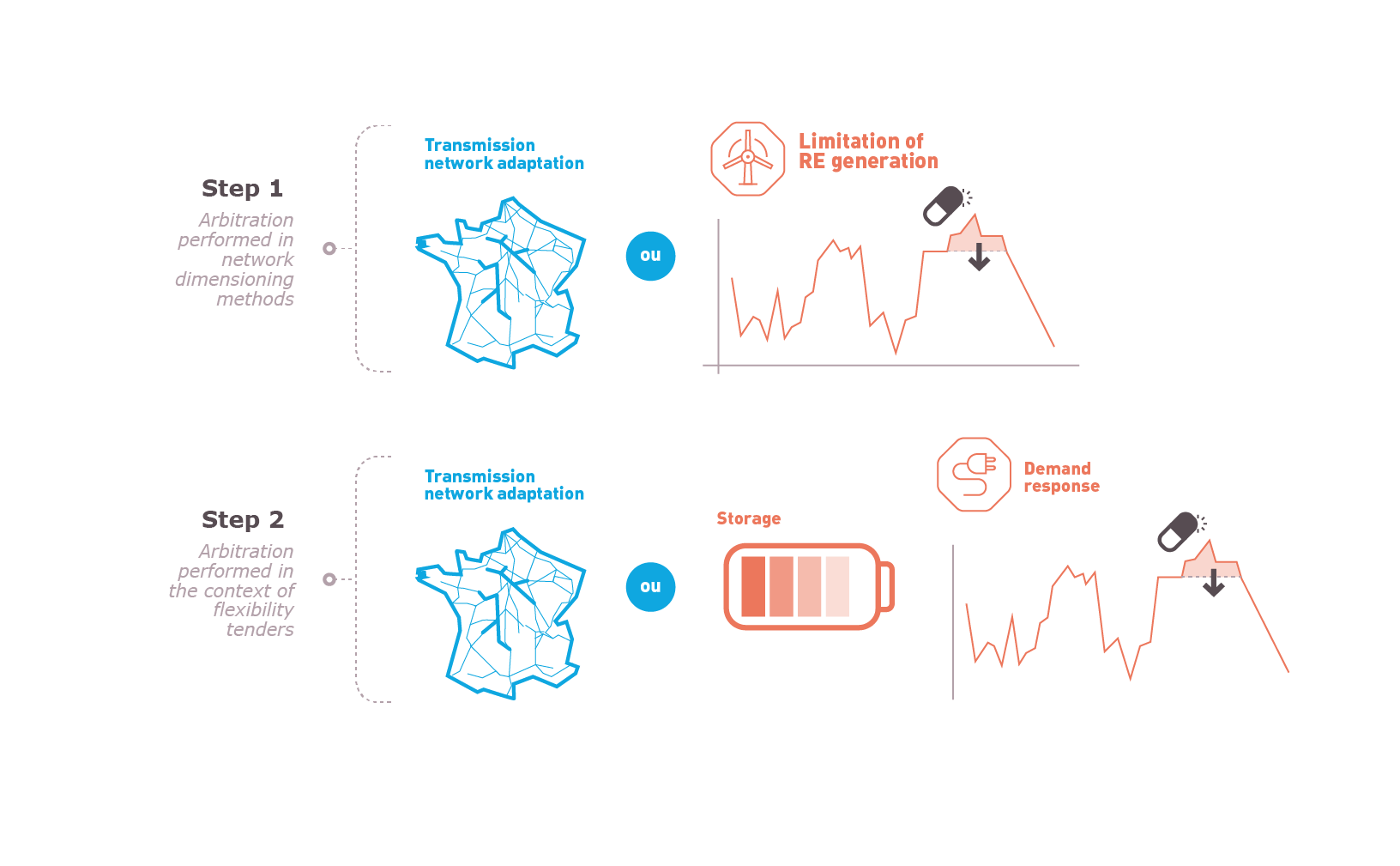 This approach is part of RTE’s road map on the participation of flexibilities in congestion management, which provides for:

The remainder of this page specifies the objectives and conditions for these experimental tenders.

Flexibility tenders are intended to pay for the reservation, over a multi-year period, of a flexibility capacity that can be activated in real time by RTE to limit congestion on the transmission system, when this flexibility is a solution for delaying or avoiding network adaptation.

The market participant providing the service commits to:

The flexibility service provider will benefit from a fixed remuneration for capacity availability (€ for a volume in MWh over a commitment period) and a variable remuneration, depending on each activation (€/Mwh).

The flexibility service may be provided by storage or consumption facilities, insofar as their location allows a significant influence on the structures of the public transmission system identified as being constrained in the experimental tenders.

The characteristics of the flexibility service (location, commitment period, dimensioning in terms of power, energy, activation conditions, etc.) depend on the constraint, and are therefore specific to each of the zones selected for experimental calls for tender.

The service offered by the market participants in the framework of the calls for tenders does not necessarily need to resolve all of the anticipated congestion on the network. However, the economic performance of a flexibility service will be assessed against the total cost including the service proposed by the market participant (fixed + variable share) and the management of residual constraints that would not be resolved by the proposed service. The flexibility service will then be considered competitive if this total cost is less than the total cost of the network adaptation solution, which consists of the costs of network investment and constraint management that would not be solved by the network investment.

During the experimental phase, only one successful tenderer can be selected for each of the zones subject to a call for tenders. The different zones may be awarded to the same winner.

The conception of flexibility tenders for congestion management is the subject of consultation in the framework of the Storage WG, attached to the CURTE market access (CAM) and network access (CAR) commissions.

In the first stage (2021-2022) the consultation revolves around the experimental contractual framework applicable to the reservation of capacity and the activation of flexibilities for the network congestion service. It will include: eligibility conditions, service commitment, remuneration conditions, terms of modification and termination of the commitment, penalties for service unavailability or activation failure, articulation between the reservation mechanism and the activation mechanism.

In the second stage (2022), the consultation will focus on the integration of flexibilities into RTE’s dimensioning processes and methods.

The consultation on criteria to identify and define the zones eligible for the establishment of the next Flexibility Calls for Tenders is currently underway.

The zones selected for the Call for Tenders

The work currently under way is in the Perquie zone.

Initially, RTE had identified four zones for the survey of interests phase, which took place from 12 January to 19 February 2021. 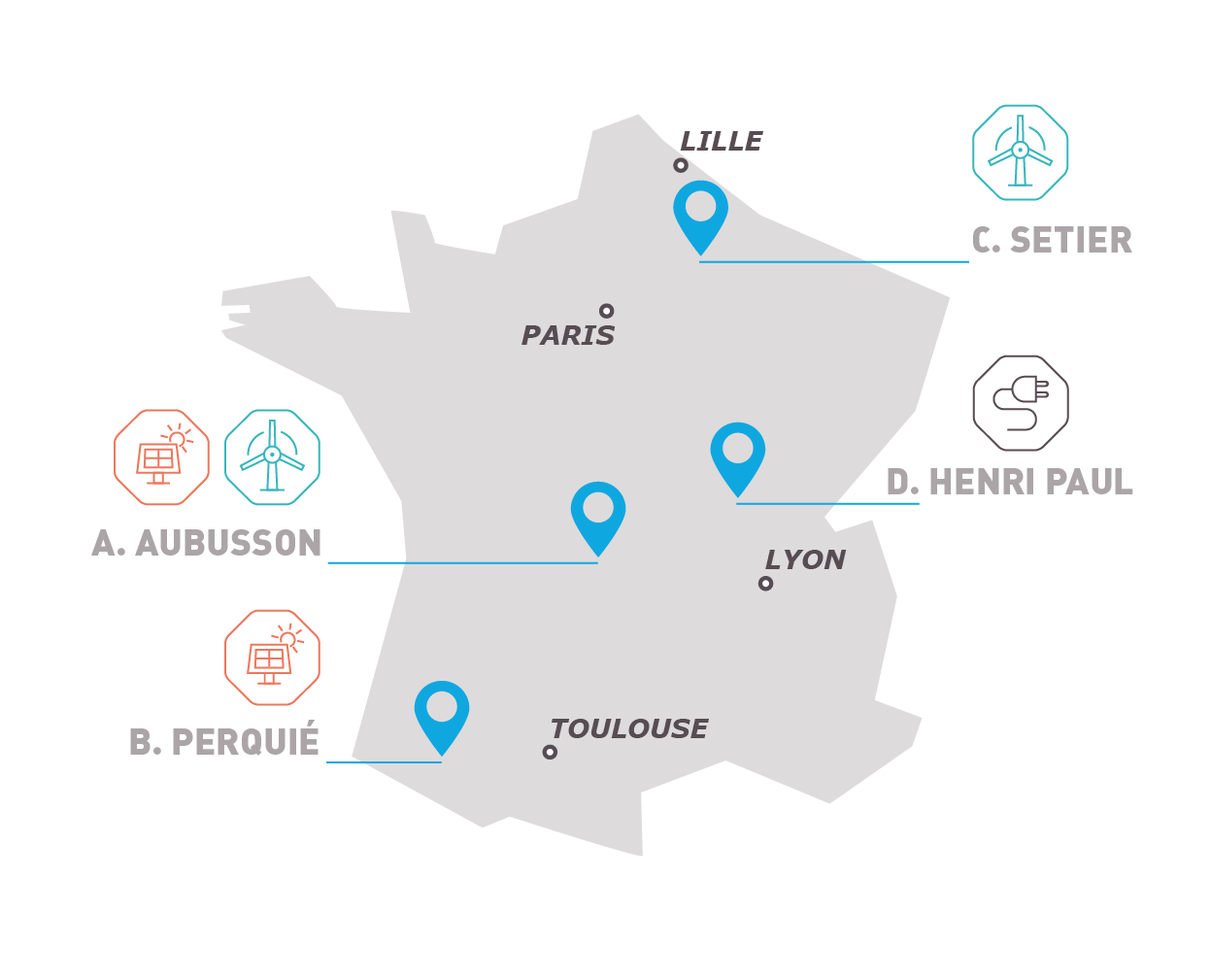 How to participate in Calls for Tenders

Market participants wishing to participate in the calls for tender were invited to apply by 31/01/2022 at the latest, in accordance with the procedures specified in the contract notice. Only candidates declared qualified at the end of the procedure have been invited to respond at the Perquie CFT.

If new zones are identified, they will be the subject of a new CFT procedure.

These time series are simulations given as an indication, in the context of the experiment and do not commit RTE in terms of the excess powers or the possibilities of future reinjection. Moreover, these do not predetermine the information that RTE will provide at future Calls for Tender.

They must allow candidates to include in their technical offer an adapted flexibility service as well as the associated price. These elements will allow RTE to compare the performance of the proposed services with a system adaptation solution.

The excess power time series represent the surplus power that the network element could not pass through.

The excess power time series for Perquie can be downloaded here:

The margin for reinjection time series represent the energy that the battery can inject into the grid to discharge, between two overload periods.

The margin for reinjection time series for the Perquie Zone can be downloaded here:

These time series take into account the same generation facility assumptions as the excess power time series above.
It should be noted that the potential reinjections depend on the location of the battery. Each file contains two tabs: one for the margin for reinjection time series corresponding to a connection at the Perquie substation and another for those at the Barbotan substation.

You can direct all your questions relating to this procedure to rte-ao-flexibilite@rte-france.com